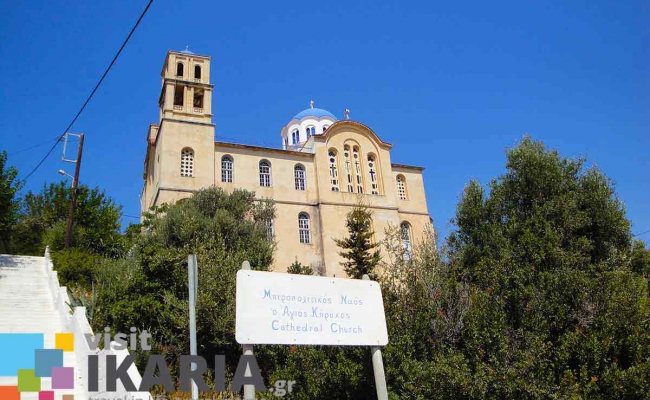 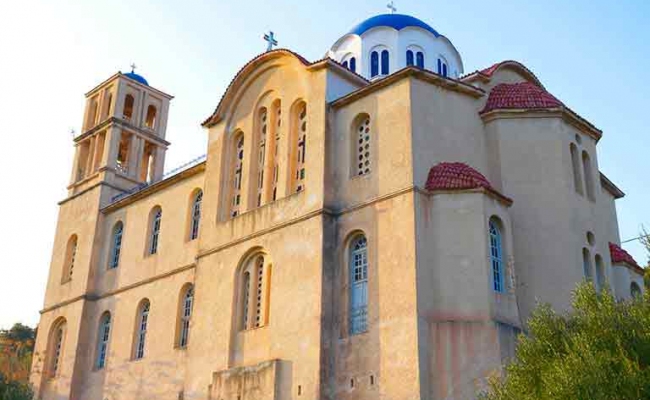 The church of the capital of Ikaria is called Agios Kirykos and St. Kirykos is the patron saint of the island, celebrated every year on July 15th.

According to historical resources, Kirykos and his mother Ioulitta martyred in Tarsus in Asia Minor in the 4th century AD and the church have declared them as Saints. Saint Kyrikos is perhaps the newest saint of the Orthodox Church, since he died at the age of 3.

The church was erected in the period 1902-1911, under the supervision of the Belgian architect Eugene Dypre. From an architectural point of view, the type of church is three-aisled cruciform basilica with a dome.The impressive blue dome of the church, visible from afar, as the boat approaches in port. It was manufactured by G.S. Fountoulis, while the iconostasis of the church is the work of A. Vlachogeni. The icons were made in marble slabs, by the painter Nick.Sitaras from Samos.

Today, the church of Agios Kirykos united with the 'Metropolis' (Cathedral) of Samos and now they form a single entity Metropolis of Samos-Ikaria-Fournoi. The Metropolis of Samos and Ikaria founded in 2012 the "Center of Ecclesiastical History and Cultural Studies". The goal of the center, is to organize and promote all the Orthodox ecclesiastical tradition of the three islands which stood for. The center collects different studies of religious traditions of the islands, holds information events and publish a magazine of its actions.

In Agios Kirykos, there was until recently a Nursing Home "The House of the Virgin Mary" and an ecclesiastical office to serve the believers.

The church of Agios Kirykos celebrates on July 15th.

To reach the church, go on foot, in the center of the town, few meters away from the port.